My! What Big LAWS You Have

As I sit and watch the daily news, I’m plagued with pictures and videos of extreme polarity.  It’s black vs. white, republican vs. democrat, gay vs. straight, amnesty vs. deportation, and police vs. the people.  I discussed this previously in my article Divide and Conquer, where I explain how elites  use the tactic to pit people against themselves. In turn, they focus on each other as the problem rather than the elites.

I want to share with you two profound cases of how the elite law makers are the ones causing the problem.  One is a spin on the Eric Garner case which you may not have read about yet.  Another is a viral video that is circulating Facebook.

Back in 2010, New York instituted one of the largest cigarette sales taxes of all the states.  On 7/1/10, NY added $1.60 to the sales tax which totals to a whopping $4.35 tax.  This is incredible vs. the current overall States’ Cig sales tax average of $1.54.  In addition, there is a local sales tax of $1.50.  That brings the total tax to $5.85 per pack, and a total price of around $13.00 per pack.  Arguably, the NY government is making more money off each pack than the actual manufacturer’s who harvested, designed, made, and shipped them!!!

Of course people who are addicted to cigs are still going to need them, but it’s too costly.  So, what has the NY Government created?  A black market for cigs.  Cigs are now purchased in other states at a lower cost, shipped to NY, and sold cheaper than what you can buy at a NY store

To deal with this “trafficking”,  Governor Cuomo announced a new Strike Force to crack down on Illegal Cigarette and Tobacco Trafficking and sales on March 31st, 2014.  Right… while police officers could be dealing with real crime like murders, theft, or other felonies, there are now officers on the street who’s sole duty it is to arrest those trying to sell “illegal” cigs.  We can’t possibly have these people stealing money away from the NY government now can we?

And this leads to Eric Garner. Eric was caught selling “illegal” cigs 9 times prior to his fatal tragedy.  When officers arrived on the scene, they recognized him and accused him of selling illegal cigs again.  Maybe he was, maybe he wasn’t.  Eric verbally resisted the officers by saying he was doing nothing wrong and to please leave him alone.  Six officers ended up piling on top of him (upon which he did not resist) and a combination of the officer’s actions and his health lead to his asphyxiation.

So, who’s fault is this?

Right now, the people are fighting against one another.  Some are blaming the cops for excessive force.  Some are blaming Eric for his record of selling illegal cigs and resisting arrest.  However, the ROOT cause is that the NY government made a ridiculous & petty law and established a task force which ultimately led to Eric’s unjustified death.

Policemen and their supporters are being backed in to one corner as public rage strengthens.  On the other side, the people are complaining of a police state.  Although I agree some police departments and individual police officers need reform, our laws are what need reform the most….the root cause!

In this video, a small skirmish broke out in a parking lot.  The police arrived and started to question people.  This individual on camera was apparently not part of the fight, and did not want to provide the officer with ID.  It led to her being choked and arrested.  Was she at fault? 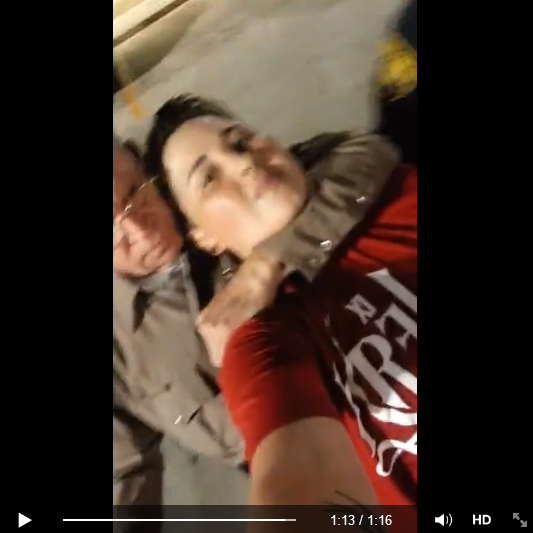 Some say yes.  She was legally obliged to provide the officer with an ID.

Some say no.  She was expressing her legal right to not provide ID as she was not part of the fight.

Although laws differ between states, here’s the Ohio Law (I Don’t expect you to read this).

2921.29 Failure to disclose personal information.(A) No person who is in a public place shall refuse to disclose the person’s name, address, or date of birth, when requested by a law enforcement officer who reasonably suspects either of the following:(1) The person is committing, has committed, or is about to commit a criminal offense.(2) The person witnessed any of the following:(a) An offense of violence that would constitute a felony under the laws of this state;(b) A felony offense that causes or results in, or creates a substantial risk of, serious physical harm to another person or to property;(c) Any attempt or conspiracy to commit, or complicity in committing, any offense identified in division (A)(2)(a) or (b) of this section;(d) Any conduct reasonably indicating that any offense identified in division (A)(2)(a) or (b) of this section or any attempt, conspiracy, or complicity described in division (A)(2)(c) of this section has been, is being, or is about to be committed.(B) Whoever violates this section is guilty of failure to disclose one’s personal information, a misdemeanor of the fourth degree.(C) Nothing in this section requires a person to answer any questions beyond that person’s name, address, or date of birth. Nothing in this section authorizes a law enforcement officer to arrest a person for not providing any information beyond that person’s name, address, or date of birth or for refusing to describe the offense observed.(D) It is not a violation of this section to refuse to answer a question that would reveal a person’s age or date of birth if age is an element of the crime that the person is suspected of committing.Effective Date: 04-14-2006

Read it once, twice and a third time. Even if you know the law like the back of your hand, if you wind up in court over it, some lawyer may challenge you and win  based on interpretation of the law.

Do we really expect law officers to understand every line of that law and its interpretation when they have to understand all the volumes of other laws like concealed carry, open carry, castle law, etc???

Do we really expect regular citizens to similarly understand all those laws?

Of course not…that’s why we have to have an entire profession of lawyers to understand them!!!

This is leading to much ambiguity between the people and the police force, and is one source of the conflict.  Make no mistake that there is also a psychological component to the police state which I discuss in my article Police Psychology: Us Vs. Them and the Pentagon 1033 Program which is giving free military surplus to the police forces.

I fear that the divide between police and people will continue to grow until we end up living in the Orwellian state that we’ve only imagined about.  Who or what do you think is at fault?