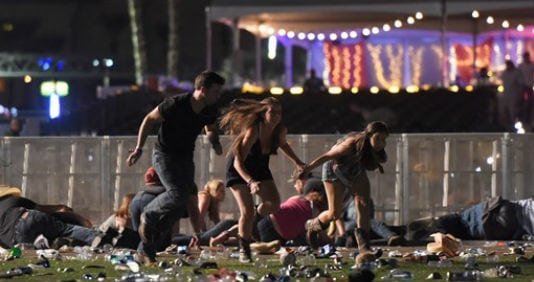 As almost everyone now knows, the tragic details following the Las Vegas, NV shooting are starting to come out.  Who is the shooter?  Was he Muslim?  Was he a veteran?  What kind of gun(s)?  While these details may make for sensational headlines, what practical learnings can be gathered from this tragedy?

Below is a cell phone video from when the event unfolded in real time.  Viewers beware, that this footage may be disturbing. 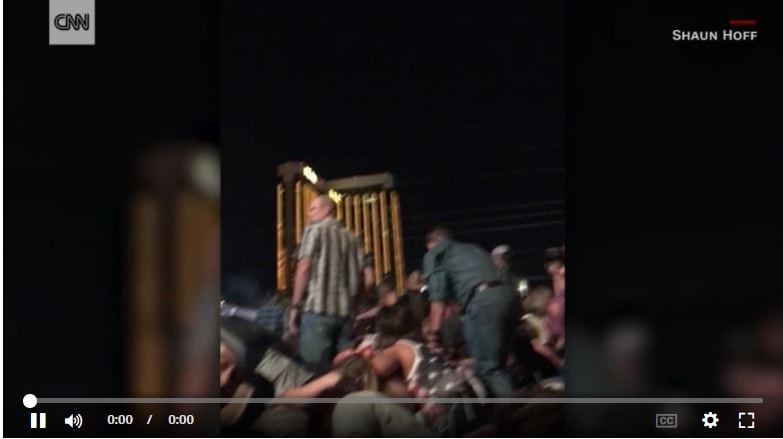 First, like many shootings that happen, people are unaware that a shooting was taking place.  Many people at this event thought that the gunshots were fireworks.  During the Paris shooting at The Bataclan Theater, many testimonies said that most people initially thought the gunfire was part of the stage props.  Indeed, to the untrained ear, it is difficult to discern between a “firework” sound and gunshot regardless of the weapon used and at what distance. 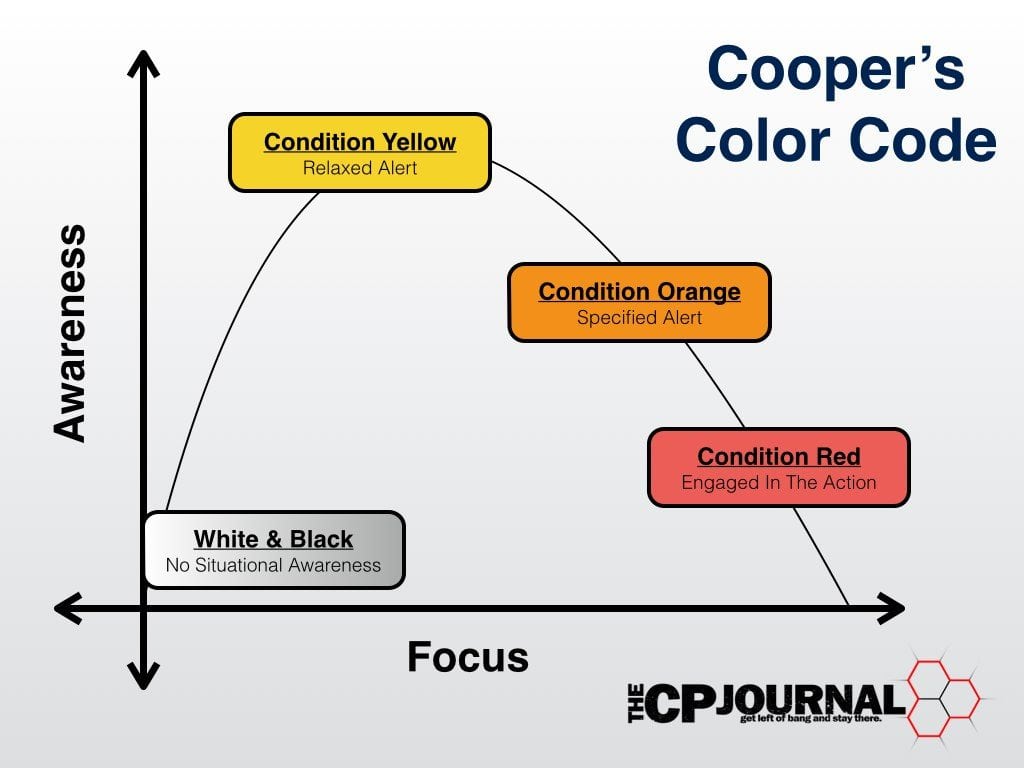 [Image courtesy of The CP Journal].  At no point should you ever be in the white zone, that is, without any situational awareness.  The majority of the people in this video are in the white zone as they are having fun, listening to music, probably drinking, etc.   Naturally, when the first shots ring out (and several minutes afterwards), people either do not pay attention or look around lackadaisically.

You should be in a yellow condition at most times.  That is, relaxed but alert.  If I were at this concert, being in a relaxed alert state, I would evaluating individuals in my proximity, seeing where my exits are in case something were to happen, avoiding the center mass of the crowds, etc.  Again, the key word here is relaxed awareness.  You cannot be in a heightened state of awareness for a long duration of time as this will not only be exhausting, but will consume you to a point of where you are no longer enjoying yourself.

Once the gunshots (or firework sounds) occur, I would immediately scan the area of the sound and quickly identify if it is a threat.  If indeed it is an active shooter threat, I would possibly arm myself with my concealed weapon (depending on the circumstances), gather members in my party, and look for an exit strategy.  As a note of caution though:  if you are a CCW holder, and a mass shooting such as this one happens, there is A LOT of confusion and disoriented people.  If you do unholster your weapon, make sure there is a clear threat that you may need to engage.  If not, and you are running around amongst a mass of people with handgun in hand, you may be inadvertently identified as “the threat” either by on-lookers or police officers…..not a good place to be.

Now the second learning lesson to be had!  If you listen closely to the audio, people are laying down on the ground in an open-grass amphitheater and screaming “Stay where you are!!!”  First,  I understand the fight, flight, and freeze instinctual behaviors and that many people will freeze in this type of situation.  Additionally, it was not clear to people that the fire was coming from an elevated position.  Thus, laying down on the ground and staying put would seem reasonable.  However, there are 10-15 second delays between when the gunman was changing his magazine.  In those brief circumstances, you and your party should be quickly seeking cover.  If you cannot seek cover, try to find concealment.  The difference between cover and concealment is that cover provides some protect from bullets (building walls, cars, tree trunks, etc.) while concealment only hides your character but can be penetrated by bullets (benches, thin walls or doors, etc.).

Overall, the human mind is complex and no one really knows how you will react to high stress environments.  Will you freeze or will you act decisively?  First, we need to cognitively train our minds on situational awareness and how we would react in these circumstances.  Next, and if you have the time/money, firearm training that incorporates stress is an amazing tool to train your mind to adapt to these circumstances.

Hope this was helpful, stay safe, and God Bless – Michael with On Point Preparedness.