Is Donald Trump a Christian?

All across the internet, there are multiple articles with Donald Trump on full display with Christian believers praying over him.  He claims to be a protestant Christian, but is that really the truth?  To start, this is not going to be a Donald Trump bashing article.  I truly hope that he is saved, tones down the narcissistic personality, and is our great champion against the New Word Order.  What I am suggesting though is that we as a community do not fall head over heels for the Donald and his promises.  Something in my gut tells me that despite all his anti-globalism rhetoric, he’s still playing their side (whether he knows it or not).

For starters, there is an article in which Dr. James Dobson testifies that Donald Trump has accepted Christ as his personal Lord and Savior.   The only problem with this information is that it is three persons removed.  Supposedly, Donald told a fellow business man who led him to Christ that he was saved, and then this business man relayed Donald’s salvation to Dr. Dobson and finally to us.  With such a spotlight on Donald, we have yet to hear him submit and repent (key words here) to Christ publicly.  In contrast, Vice President-Elect Mike Pence has testified openly in this video on his submission to Christ as his personal Lord and Savior.

In addition to the fact that we have not publicly heard or seen Donald’s repentance, we have also not really seen the fruit of his salvation.  If he was saved, he is certainly a newcomer Christian and has a long time to grow.  However, during the whole election cycle, we only saw Donald praise himself over and over again.

In contrast, we do have ALOT of evidence to suggest that Donald is simply playing the “Christian Card”.

In this video I did over the summer, Donald Trump is interviewed in 2015 and asked if he has ever asked God for forgiveness.  After a long winded political spin, Donald never answers the question.  However, the interviewer is not satisfied with the circle talk and asks him again “but have you ever asked God for forgiveness?”  With Donald on the spot, he says “No, I don’t think I ever have.  I just try to do a better job.”

This video proves much more than the fact that Donald has never asked for forgiveness.  In circumventing the interviewers question about Donald’s repentance, Donald says that his pastor was Norman Vincent Peale.  Per Wikipedia, Norman Peale was a 33 degree Scottish Right Freemason!  If you are not aware of the freemasons, the 33rd degree is the highest order of the religion…a religion that serves Lucifer. 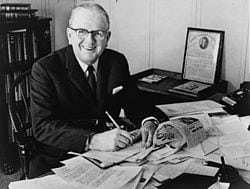 So there we have it…not only has Donald testified that he has not asked God for forgiveness, we also have him saying that his main pastor that shaped his life is Norman Vincent Peale….a 33 degree freemason that says Christ is not the only way to heaven.

Norman Peale’s influence on Donald Trump has been very profound…make no mistake about it.  The Trump and Peale clans have history. Norman Vincent Peale presided at Donald Trump’s wedding to Ivana Trump. He also officiated at the wedding of Trump’s sister Maryanne. The mogul co-hosted the minister’s 90th-birthday bash.

To me, this is more than enough proof to not trust Donald Trump.  And let me reiterate…this blog post is not about picking and choosing individuals and determining whether or not they have achieved salvation.  That is truly between that individual and God.  However, we must not play into the hands of a potential deceiver.   When I’ve told others about my research, several people have said “But I saw Donald at several churches praying with the congregation.”  My response is….”Well, Joel Olsteen LEADS a church of tens of thousands and do you think he is doing the Lord’s work?  Remember, just like Norman Vincent Peale, Joel Olsteen is also on record on the Oprah show saying Jesus is the only way, but there are multiple ways to Jesus (e.g. – other religions).

Another interesting fact is that there is a lot of occult symbolism that surrounds The Donald.  On election day, there was some pretty incredibly symbolism at The Empire State Building that suggested that Hillary Clinton and Donald Trump were one in the same.  You can watch all that symbolism unveiled in the below video.

So, what do you think?  Is Donald Trump a true Christian that is looking out for the American people?  Or is he part of the scheme.  Remember also that in 1928, Adolf Hitler was quoted as saying “We tolerate no one in our ranks who attacks the ideas of Christianity … in fact our movement is Christian. We are filled with a desire for Catholics and Protestants to discover one another in the deep distress of our own people.”