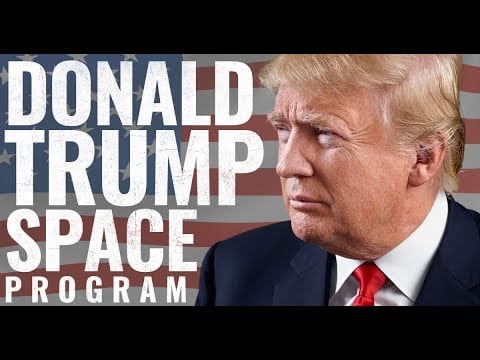 Trump and his Space Force was the meme heard around the world!  For the common man, this was just another Trump joke prodding at his stupidity.  For the conspiracy theorist, this probably stoked fears of intercontinental ballistic missiles with nuclear tips. But for the Christian Truther, we see that Trump and his space force links directly to an end times deception that deals with “aliens”.

Aliens is not a topic that many Christians speak of.  It’s a topic that’s reserved for the “weirdos” of society.  However, as I discussed with CEO of Creation Ministries International, aliens are merely the physical representation of demonic entities.  Gary Bates is the North American CEO of creation.com.   He recently came out with a full featured film that was shown in theaters about how aliens are interdimensional demons.  Gary’s work was set out to expose them for what they are, but being that his ministry is focused more on Genesis, he did not have much to say regarding aliens/demons and the end times.

However, for all of us who have discernment, we know that aliens directly tie into the end times and perhaps the anti-christ.  We know that the world would come together immediately upon the disclosure of aliens.  Even Ronald Regan said this in one of his congressional addresses.  We also know that the anti-christ will have amazing signs and wonders, and the world will wonder after this beast system.  How does this not fit the bill with an alien disclosure/deception?

This is especially interesting as Trump just so happens to announce his “Space Force”.  Didn’t this come at such a unique time?  We have the possibility of global war, the stock markets are poised to crash, the earth is going through major earthquakes and changes and more.  And now this?!  Watch the video and judge for yourself.  I hope you come to the conclusion as many of us have that the alien deception is one of the key possibilities of the end times.

RAW: Inside Look at One World Religion Festival
What’s Happening in ARISE Church!?