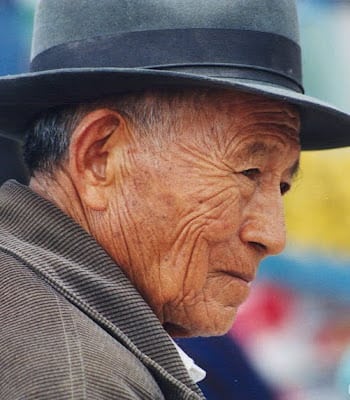 Today, I felt compelled to share a story with you all.  You could arguably say that this article is fiction as I do not personally know this man or his life story.  I have not spoken to him once, but have intently observed him over the course of repeated visits to a restaurant.  My thoughts are largely assumptions, but for some reason, I feel as though I can read this man’s eyes.

The restaurant that I’m speaking of is a Panda Express.  It is one of many chain/corporate vendors that sprawl across a booming (I use that term loosely) section of Ohio.  As I work in the same vicinity, I’ve gone there several times for lunch.  Every time I do, I cannot help but observe the sole cook working in the open atmosphere kitchen.

He is a rather stoic, elder, Chinese man with salt and pepper hair and a wrinkled yet youthful face.  He is a walking billboard…suited up head to toe in his Panda Ex Hat, shirt and matching pants.  He is incredibly focused on his work, and I rarely see him standing idly by.  He is constantly cooking, cleaning or organizing, even if the day is slow.  While he works, he is surrounded by 3-4 co-workers who serve the food and check out customers.

The other workers appear as if this is their high school job, or  simply a stepping stone as it is the only job they can find.  They are distinctly different from the Chinese man in many ways.  The workers are fairly young; each of them must be a teenager or twenty-something.  Some are modern/progressive;  tattoos, piercings and a splash of brightly dyed hair is not uncommon.  There is also a perceived and distinct attitude/work ethic difference from the elder.  Although they are all pleasant and helpful, they do not carry the same purposefulness.  It is most likely all these polar opposite characterizations that make him stand out to me.

And so here I sit, in the corner of the restaurant, eating fried rice and Teriyaki chicken.  The majority of customers came in alone and have their faces embedded in their cell phones.  The workers are either finishing up with the last stray customers or socializing with their peers.

And the elder Chinese man is still working…cleaning, cooking, organizing.

He does not seem upset or angry that he is working.  He does not throw glaring stares at his 40 year younger counterparts.  Only on occasion will he look up from his work and stare outside through the windows of this corporate fast-food cell.

Now, I must interject.  Maybe this man is perfectly happy with his job…perhaps that is why he is such a high performing worker.  Who am I to call this his “corporate fast food cell” when I don’t even know his story?  Nor do I know the career opportunities that Panda Express has for their employees.  However, when I look at him in stark contrast to his peers, and I capture a glaze from his eyes as he looks outside, I cannot help but let my mind run wild with what I know about this country called America.

Across the street in a smaller plaza, there lies an abandoned Chinese restaurant that was privately owned.  Its sign had been torn down, and all that is left is a shadowed image of the restaurant name from where the sun did not bleach the building’s background paint.   It is now surrounded by more corporate chains and will most likely be occupied by a chain restaurant itself.

Was this man the owner of the restaurant and put out of business by the sprawling corporate machine?  Was he forced from working out of his own restaurant’s kitchen and into Panda Ex to be paid a meager minimum wage?  Should he even be working at all?  Although I cannot pinpoint his age, I would argue that he is in his mid to upper 60’s.  Perhaps every time he looked out the window, he was looking at the business he once lost.

I think of other Chinese restaurants where the entire family is trying to live the American dream.  The mother, father and other relatives are all working the register or cooking food.  Their children are almost always in a corner of the restaurant playing, doing homework, or helping clean and set tables.  In many cases, the family lives in an adjacent or upstairs home.  They are all struggling to live the American Dream.

Or what about all the elderly Walmart greeters that are forced to police you as you walk through the exit.  They cautiously have to approach you as you exit with your bagged items and ask for proof of receipt.  What an incredibly uncomfortable situation as you do not want to “profile” particular people, nor stop every single shopper.  What ever happened to using concealed loss prevention specialists instead of putting up an elderly “bouncer”?  It’s a shame that they are forced into the work place due the design of this debt based monetary system.  Instead, they should be happily retired on the hard earned (non-inflation diminished) savings, and passing on their wisdom and knowledge to their grandchildren.

The debt based monetary system and horrendous crimes of politicians are enslaving Americans into serfs.  There are no signs of stopping as evident through recent bills like the Trans Pacific Partnership (TPP).  All of the small businesses are disappearing across America and the big corporations are getting bigger with record mergers and acquisitions.

In what free country can we have three generations of Bush’s run for president?

In what free country can we have a criminal like Hillary Bush run for president?

What kind of free country needs constant surveillance of our citizens and ramping up of a police state?

I fear for our children and weep for my elders.  America is lost

Prepper Perspective: What if you looked at the world, but were still blind?
DIY Homemade Firewood Storage