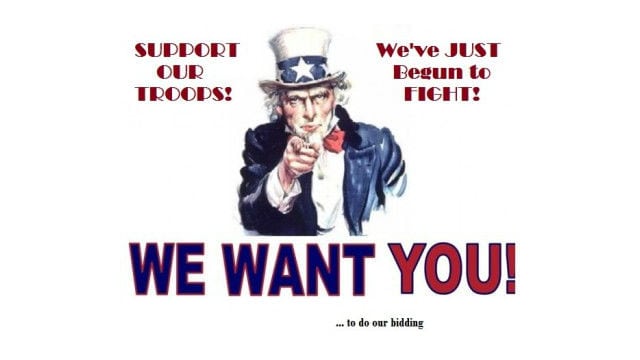 In my opinion, one of my most important videos/articles that I’ve written is An American Draft & Your Bug Out Plan.  For your own sake, please watch the video!  The reason I feel it is so important is one, I have hardly heard this concern come up in conversations within the prepper community; and two, it is a very real and devastating threat to all patriots.  What happens when SHTF doesn’t happen to everyone in your community?  What if SHTF lands only on your doorstep in the form of a letter to report for military service?  How do you “bug out” from that scenario…if at all? As I’ve described in this article, world war is on the horizon…that much is certain.  And if the previous wars are any indication of how WW3 will be fought, about 60% of the service members will be draftees.  The draft is an almost certainty as our military is too stretched from the decade + long wars we’ve been fighting.  We have lower numbers of servicemen and are psychologically stressed due to too many tours of duty.  In fact, as I discuss within the video from my prior article, certain congressmen have put legislation on the books to reinstate the draft.  Also, as I discuss below, draft dodging is already occurring in the Ukraine. When I first published the video on this topic, I anticipated some paradigm shifts in how people think about bugging out and preparedness.

What I did NOT expect was this….

I expected that many preppers would have any one of the following kinds of thoughts: – What happens to all the preparations you’ve been storing at home?  You are essentially giving them all up to be shipped overseas to fight.  If you are single and live alone, all your hard asset preparations are pretty much worthless.  The only benefit to you might be the survival skills you’ve learned and can apply overseas. If you have a family, you can rationalize that your family can use the preparations while you are gone.  However, did they invest as much time and energy as you did in terms of understanding  how to use all the items? – Will the war wash up on American shores and I will not be home to protect my family? If you follow the news today, you’ll find that strategic nuclear bombers from Russia have been doing an excessive number of drills around US territory in response to the NATO build up on their border.  It is certainly likely that we will see the face of war on our soil. – What if I dodged the draft?  I would have to become a hermit to society and live in isolation.  If I were found, I would be imprisoned.

Rather, THIS is what I found

I found an overwhelmingly pro-military response from preppers.  Hardly any prepper said that they would dodge the draft and to do so is cowardly. This is just one typical response

HOLD ON A SECOND HERE… I have many networks in the preparedness community and almost all preppers are condemning our government for taking away our 2nd amendment rights, destroying our liberties via the Patriot Act and NDAA, not respecting our privacy via NSA surveillance and new FCC regulations, militarizing our streets by arming local police departments with military gear, etc. etc. However, when a call to arms comes from the exact same people that have trampled our freedoms and liberty, many preppers jump on the bandwagon to be the strong arm of these corrupt politicians?  The same Congress that has the lowest approval rating (15%) of any congress! No one questioned whether the war was justified.  They simply put their whole testosterone “hoo rah rah” behind military brass and “support our troops” mentality. I’m sorry, but this is one of the most confounding things I’ve ever witnessed.  This is NOT patriotism!  It seems to me that the psychological operations/propaganda of supporting the US/Rome Military Conquer mentality prevailed over this country. Now, don’t get me wrong.  I am not for trashing the troops as we saw in Vietnam.  Quite the contrary…I think the anger, uprising and civil unrest should be aimed at the politicians who are using our men, women and children to do their bidding. The other issue is if there was a preemptive attack on the US.  In this circumstance (assuming it was not a false flag), I would be more inclined to fight for my country. Some of the arguments against my position were: – “There are always corrupt politicians and this is the way of things.”  Really?  So we are just suppose to sacrifice our lives for the status quo? – “I’m 50 & too old” – Sure there might be some US historical perspective on age (e.g. – US/WW2 was 18-45), but look at Ukraine RIGHT NOW!  Per Mail Guardian – “Ukrainian men aged 25 to 60 are eligible for conscription and 75 000 have been called up, of whom 60% will enter service, Poroshenko claimed last week. Preference is given to men with military experience.”  This news of draft dodging comes at the heels of a Ukrainian journalist who was jailed for encouraging men to dodge the draft.  – Also, “it is not about fighting for politicians, but for your fellow solider.”  I agree that if you get your ass dragged onto the battlefield, it is much more about your fellow man than the politicians back in Washington.  However, why wouldn’t you and your fellow battle buddies fight against the corruption of Washington before they shipped you overseas to die?

It is imperative for me to get this information to you BEFORE the US has its own military draft.  Similar to Ukarine, it is imperative to have this discussion NOW as myself or others would likely be jailed if we called for draft dodging when it happens. Is is becoming increasingly clear to me that America is no longer fighting to retain its freedom.  Rather, it is fighting to preserve its dominance.  Since 1991, we have been in endless wars to “protect our freedom”.  A look at America today shows that our freedoms have not been whittled away by some foreign invader, but from the suits that sit at the capital. Unless we wake up to who the real domestic terrorists are (e.g. – corrupt bureaucrats), we will all lose our freedom.

Better Survival Knot Series – Versatackle Knot
The Only Truly Compliant, Submissive Citizen in a Police State Is a Dead One