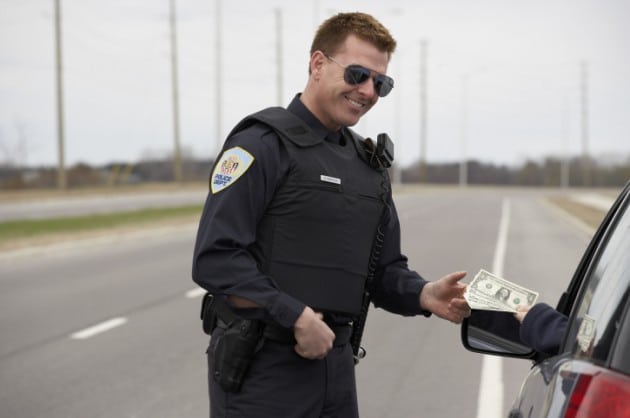 How to Bribe at Checkpoints – Prepper Negotiation Skills

If you’ve ever had conversations with military members or private contractors that have worked overseas, they will confirm that check point bribery is very common in certain places.  Even if you’ve visited foreign countries like Costa Rica or Nicaragua, some traffic officials can be bribed.   With check points coming up all around America, this is a very important skill to hone if you want to have the best shot at getting where you need to be, or even getting out of trouble in a collapse scenario.

First, a prepper needs to be keen and understand if it is even worth it to bribe.  Sometimes, it’s wise to forgo negotiations as the consequence of a failed bribe is worse than the initial penalty.  For example…

1. Bribes are usually only common in areas where the enforcement officials are no better off than the rest of the struggling community.  That, or you have a keen awareness that the area’s officials are very corrupt and bribes are common.  Don’t expect to bribe your way through American law enforcement checkpoints in our current environment.

2. Recognize that not everything is negotiable.

3. Not everything is always worth negotiating.

If you get the  gut instinct that a bribe might be possible, be aware of these tactics:

1.  Be aware of how you are perceived!  As a rule of thumb, I would say it is best to try and identify as much as possible to the social class of the person you are bribing.  Come off as a rich person and the official might be spiteful of you or rip you off of as much money as possible.  Come off as a poor peasant and you’ll be trampled on.  Think about how you dress, what you’re driving, how you talk, etc.  Again, good situational awareness.

2. Only deal with 1 person at a time.  Even though bribery might be common in a particular area, it still might be viewed as a faux pas when one officer is in the presence of others.  If you cannot avoid the 2+ person conflict, you’ll need to be very tactful.

3. Again, even though bribery may be common, it can still be a faux pas.  Even though all players know the game, try to make it sound more “legal”.  For example, instead of telling the officer “Here’s $20, can you just let me through.”  Change it up and say “I know I forgot my pass.  Can I just pay the fine directly to you?  That would be much easier.”

4. Be discreet – Similar to #3, even if you are working with only one person, don’t hand off your bills (or other times) in plain site.

5.  Keep your bribe money separate from other money.  You do not want to be flipping through a stack of $20 bills and only pick out one of them to hand to the officer.  It will insult them, have them ask for more of your money, or even get you beaten up and have all your money taken.

6.  Try not to low ball.  In areas of the world where people try to bribe their way out of traffic tickets (Costa Rica, Nicaragua, etc) , a sum of around $20 usually cuts it.  However, this figure is highly fluid and impacted by many factors.  What is the nature and severity of the stop?  What’s the value of the dollar in the country you are in? Is the dollar even in use? As per #1, do you appear rich with a lot of money?  It’s best to do some research with locals who have passed through the check point to see what’s acceptable.

7.  Never lead with “this is all I have”.  For example, what if you’ve heard that an officer at a particular checkpoint accepts $20 bribes.  When you arrive, he’s actually increased it to $30?  If you’ve led with “Here is $20 and it’s all I have”, and he says “No”, what are you doing to do?  Pull out more money and you’ve just been proven to be a liar.  A better lead statement would be “I don’t have much”.  If he says “No” and you need to find more cash, deploy tactic 6.

8.  Show the right amount of hesitation.  If you get into a price negotiation, showing a bit of hesitation shows that you are trying to make ends meet and not short change him.  In the example in #5, I would root around for a couple extra bills (or other barter) and act as if I found a little bit extra.  Similarly, if you hand over a physical item like a watch or jewelry, you can say things like “This is my family heirloom.” which adds to the perception that you are forking over as much as you can.  Don’t procrastinate too much or you’ll unnerve the officer.

9. Right time of day.  If you know you are going to go through a checkpoint where you will need to bribe, don’t do so during a time of day when it will be heavy traffic.  This relates to #2 because the less people around and involved the better.

Hopefully you’ll never need to bribe your way out or into an area.  However, with unconstitutional check points increasing and liberties fading, it might be an invaluable skill.

If you’ve liked this article, do share & vote for me on Top Prepper Websites below!