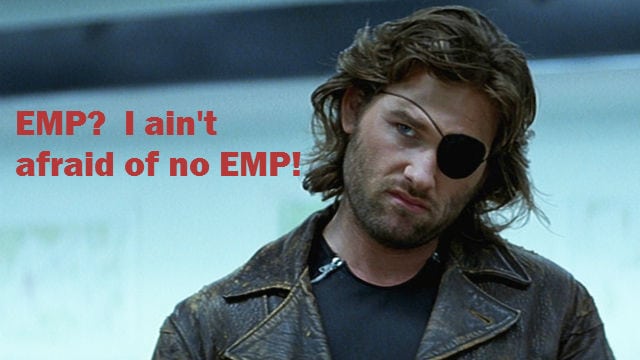 EMP Protection you can COOK with!

EMP protection is something that I had not given too much thought… that is, until lately.  Although the threat is real and discussed openly in  Homeland Security Briefings, it was low on my radar compared to economic collapse, riots, non-nuclear world war, etc.  However, observing events of the past couple of months, paired with the stark reality of what an EMP would do to your preps, I suddenly found myself finding all the ways in which I could protect my electronic assets.

If you haven’t been reading up on the news lately, you might find it interesting that the US government is moving resources and communications back into the Cheyenne Mountain Complex, a bunker that can withstand EMPs and a 30 ton nuclear blast.  This bunker was created and used during the first Cold War for government continuity in case of nuclear war or an EMP attack.  After the cold war, the bunker was maintained, but NORAD and other assets were moved out.

Isn’t it interesting that NORAD is moving back in and calling it home?  Do they know something we don’t know? Or are they basically confirming the obvious (e.g. – nuclear war)?

If NORAD’s actions concern you, and I believe they should, perhaps you should care to understand a little bit about this threat…

If you think that EMP is more of a theory than an actual weapon, think again.  Here you can read about a non-nuclear EMP attack device developed by Boeing & the US government.  If you want to SEE it in action, you can watch this video.

Although the Boeing device is more of a targeted weapon which would be used against critical infrastructure rather than the individual prepper, it could still impact you greatly.  If another country has the same technology and strikes your local power plants, it is lights out for you.  In fact, our government is outright saying that China and Russia may use EMP as a primary means of attack.  If your local power plants are disabled, you may still be able to use solar, wind or car alternator created energy if they were not in the weapon’s scope…so, there is at least some saving grace in this event.

However, there are two other worst case scenario that apply to all of us.  If a nuclear bomb were detonated in the atmosphere above America, it could potentially disrupt the power grid of the lower 48 states.  Additionally, the energy wave from this type of device has the capability to destroy all electronics (cars, small devices, large devices, etc.) 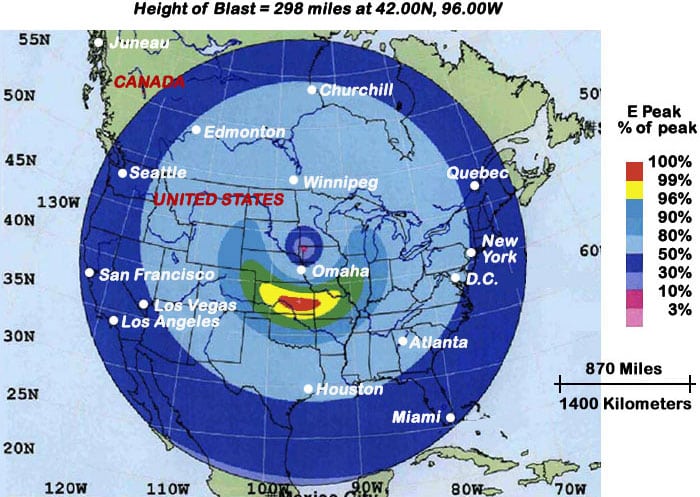 Another possible catastrophic event which happened in 1859 and known as the “Carrington event” was when a solar flare /coronal mass ejection energized telegraph systems and caused wide spread failures.  The energy from an event like that today will most likely affect power plants, transformers and anything connected to the grid.  Small electronics that are not hooked up to an AC line may be spared, but it is no guarantee.

No one truly knows the risk of an EMP attack (either man-made or natural) actually occurring.  However, based on the actions and statements of our government, it should definitely warrant your attention.  In addition, regardless of the probability, can you imagine how an EMP might upset your Bug-In or Bug-Out plans?

As shown, there are a number of severe consequences if an EMP electrical outage occurred..so much more than I could possibly cover.  I cannot imagine the chaos that would ensue after such an event.  If you’ve ever seen Snake Plissken’s Escape from LA, you might have a Hollywood idea of it.  Being that EMP protection is fairly cheap, it is something you should invest in.

The realm of EMP protection is very theoretical and people have diverse opinions on design.  Some say they need to be grounded, others say you don’t.  Some say foil works, some other say it does not.  Some say your Faraday cage must be insulated from the ground…and again, some say not.  Personally, I’ve researched non-prepper oriented physics articles and the consensus is that you should have a continuous, solid (not mesh wire), thick metal box with no ground and insulated above the ground by wood or other material.  Will it work?  Sure you can watch videos of people testing out cell phone signals and two-way radios, but there is no telling until an actual event occurs.  However, we must at least try based on the Faraday theory.

My most recent idea for EMP protection is use of an All American Pressure Cooker.  These cookers have a metal on metal lid seal, and therefore work well as a Faraday cage.  All you do is put a simple plastic bucket (or other insulator) inside and shut the lid.  You may also need to fill in any accessory holes or vents with foil.  If you ever need the pressure cooker for its intended purpose, simply lift out the plastic bucket and you’re good to go.  It’s like hitting two preps with one stone!

As the metal is intended to withstand pressure, it’s very thick – a plus for EMP protection.  With six clamping knobs, you are sure to get a good metal on metal seal.  AND they are big enough to hold most all your small electronics.  In the below canner, I can fit my night vision, two portable backpack solar panels, 4 hand held radios, assortment of batteries, red dot sights, and some other communication gear!  All this EMP protection and All American is an excellent and durable brand for canning meats and other food. 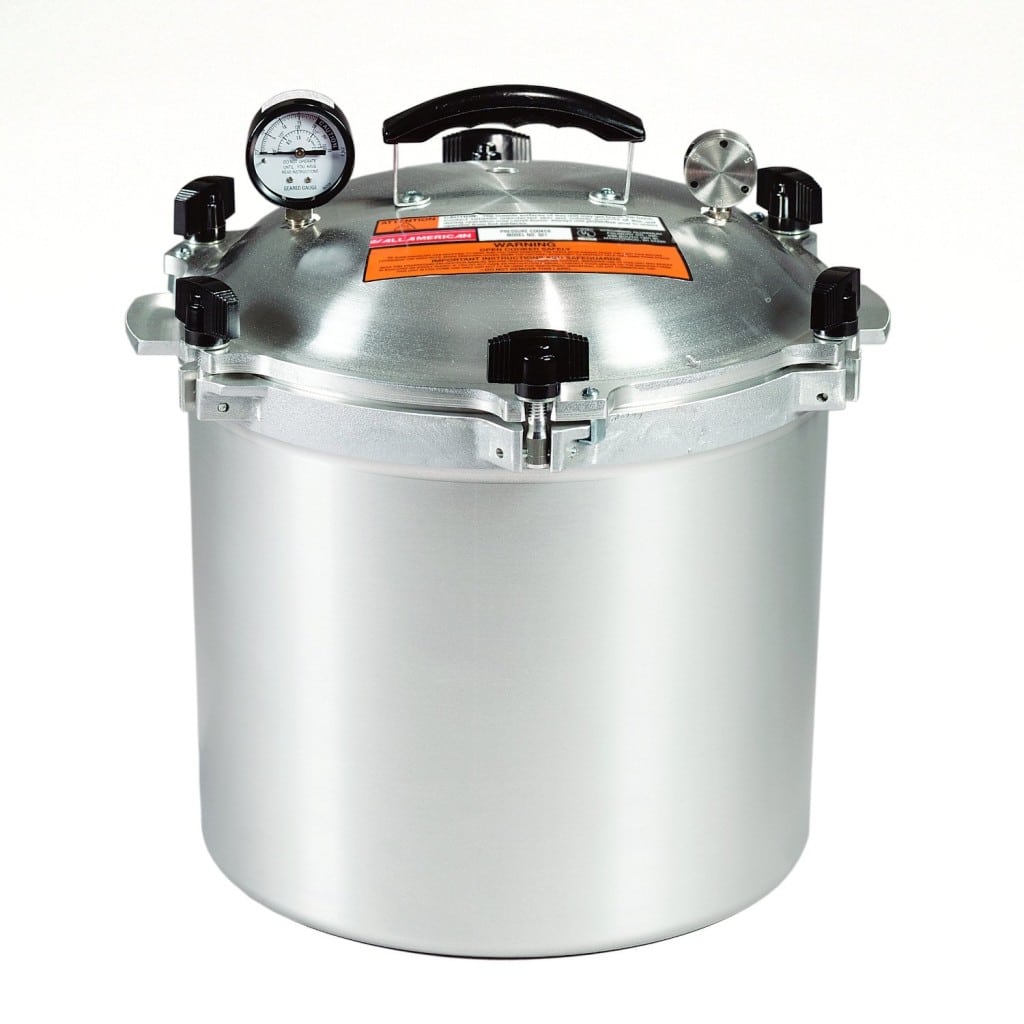 You should avoid any water bath canner or pressure cooker than has a rubber gasket as Faraday cages need to have a continual metal covering. 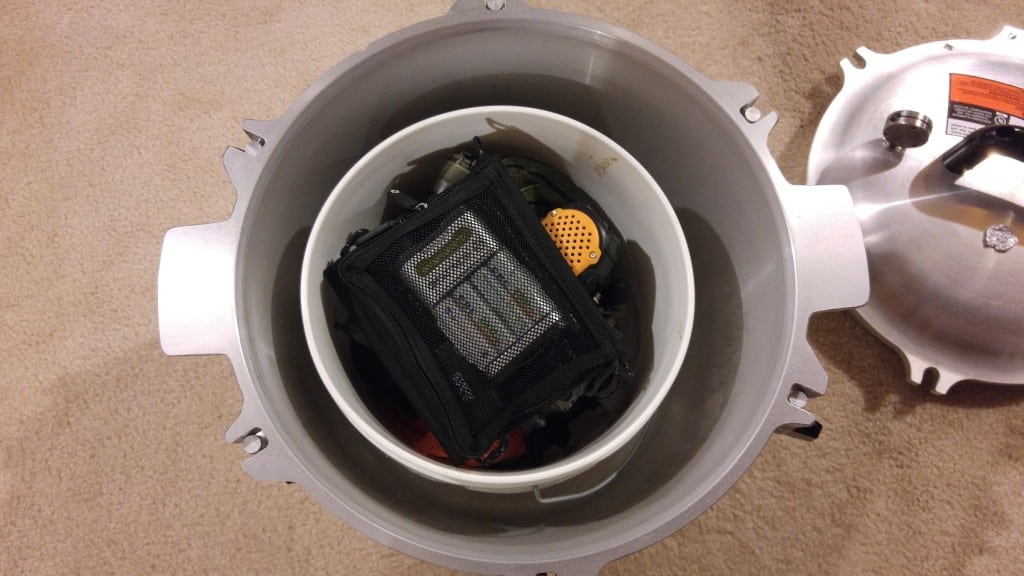 Another cheap and satisfactory option is to buy a metal trash can and line it with a plastic trash can or other insulator.  However, keep in mind that you may need to line the lid/can seal with aluminum HVAC tape to seal off any energy wave entry points.

For some of my other EMP recommendations, as well as blue prints for a large EMP cabinet using sheet metal, refer to this article “Preparing for Solar Storms or EMPS”.