ATF Ammo Ban Recall: Have we been fooled?

Right now, patriots and 2nd amendment supporters are cheering the fact that the ATF recalled their proposed ban on green tip M855 AR-15 ammunition.  However,  I came across a VERY interesting article this morning about a Supreme Court Ruling which may be directly linked to the reason the ATF stopped their pursuit of the ban.  Is the reason they recalled the ban purely due to the public response?  Or is it because they got a Supreme court “green light” to ban the ammunition at some point in the future without public notification?

“Regulators won a big victory at the Supreme Court on Monday as the justices endorsed expansive powers for changing the interpretation of federal rules.

The Supreme Court ruled 9-0 that federal agencies do not have to follow procedures for notifying the public and collecting comment when changing the interpretations of rules, effectively removing steps from the process that can take months and sometimes years to complete.”

“The decision contradicts the D.C. Circuit Court’s Paralyzed Veterans doctrine, which holds that an agency must use the APA’s notice-and-comment procedures when it wishes to issue a new interpretation of a regulation that deviates significantly from one previously adopted.”

“Justice Samuel Alito said the Paralyzed Doctrine likely stemmed from fear that federal agencies were becoming too powerful and concerns that Congress was affording them too much lawmaking authority.”

“We can expect the current administration to use this ruling to back up its authority to pass new or change existing precedents,” he said.”

Per the official ruling documentation syllabus:

The Administrative Procedure Act (APA) establishes the procedures
federal administrative agencies use for “rule making,” defined as the
process of “formulating, amending, or repealing a rule.” 5 U. S. C.
§551(5). The APA distinguishes between two types of rules: So-called
“legislative rules” are issued through notice-and-comment rulemaking,
see §§553(b), (c), and have the “force and effect of law,” Chrysler
Corp. v. Brown, 441 U. S. 281, 302–303. “Interpretive rules,” by contrast,
are “issued . . . to advise the public of the agency’s construction
of the statutes and rules which it administers,” Shalala v. Guernsey
Memorial Hospital, 514 U. S. 87, 99, do not require notice-andcomment
rulemaking, and “do not have the force and effect of law,”
ibid.

Note that this ruling happened one day prior to the ATF recalling the proposed ban on M855 green tip ammunition.  Also remember that this all originally stemmed from a change in the long standing interpretation of the laws regarding this ammo type.

In fact, even before this ruling, the ATF had tried to avoid posting this ammo ban notice to the public via this article – ATF Claims Administrative Procedures act Exemption for proposed Ammo Ban, February 18th, 2015.

Was it purely public comment and outraged that encouraged the ATF to recall their ban?  I think it certainly created a thorn in their side, but remember this exclusive article: Common AR-15 Green Tip Ammunition Already Banned in New ATF Regulation Guide?

In that article, it proved that the exemption of M855 ammunition in the 2005 ATF Regulation Guide was removed in the 2014 version way before they even notified the public of their intent. 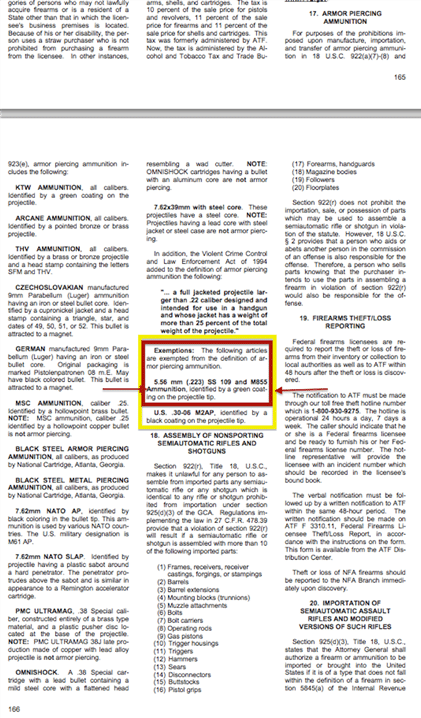 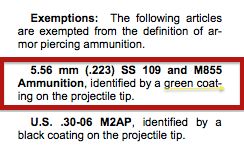 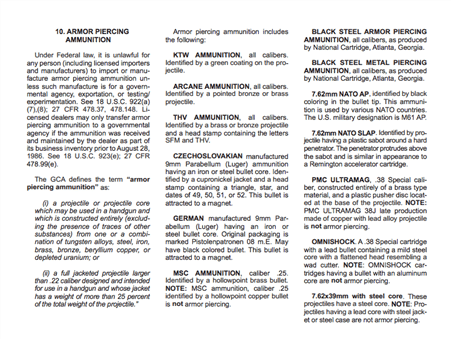 Have we been duped?

As I’ve expressed in my article Why There Will NOT be Peaceful Revolution, the government has had its way with us regardless of public opinion.

Remember how the public was outraged when we did not want to go to war with Syria?  Guess what, we are bombing Syria because we are after ISIS….

Remember how outraged we were with the NDAA and Patriot act.  Yeah, those are still active and removing our constitutional rights.

You know about all the public outrage of our military police state?  The pentagon 1033 program which is facilitating the transfer of military arms to local police departments is still occurring.

Perhaps this is just a coincidence and this Supreme Court Ruling is in no way linked to the ammunition ban.  However, just as Justice Alito said in the quote, we should be afraid of this ruling as it allows the Feds to run wild with “interpretations” of virtually any law that is already in place.

If you’ve followed the news over the last decade and our federal government’s actions, the trend is clear.  The walls are closing in around us and our liberties and freedoms are being sucked dry regardless of our opinion.

Urban Survival & Lock Picking
Does the Liberty Movement Have a MockingJay?