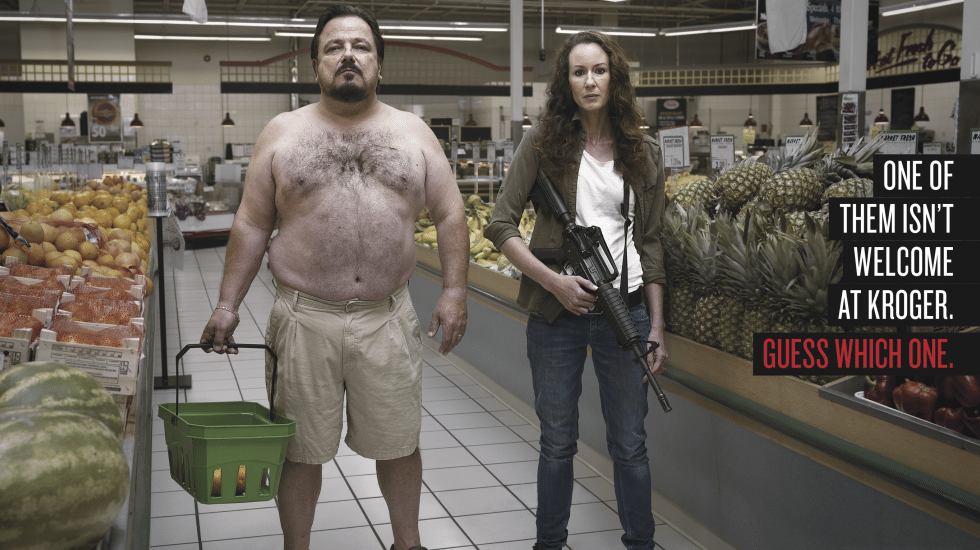 If you may not know, Indiana based anti-gun group – Moms Demand Action has shifted their focus on to Kroger to prohibit firearm carry in their stores.  They have just spent $100,000 on an advertising campaign against the store and have also received $50 million dollars from the Michael Bloomburg anti-gun advocates.

This gun group has steam and is going after large corporations like Starbucks, Target, Panera, Kroger, etc.  Well Moms, have you seen the following video?

Two customers were ruthlessly beaten by a flash mob of teenagers – one a Krogers employee and the other a shopper.  Neither did anything to provoke the attack!  I am unaware of the condition of the two people injured, but based on the video, one had his head stomped into the concrete by the assailants, a possible life threatening injury.

If Kroger prohibits carrying (open or concealed) in their stores, you will have no means to protect yourself from this kind of assault.

Unfortunately, Kroger does not have a clear email that I can pre-populate a message to. However, you can copy and paste the statement below into Kroger’s customer comment page. Do your part for the safety of yourself, friends, family and Ohio!

I am a loyal shopper to the Kroger family as well as a responsible 2nd Amendment Advocate.  I recently came upon news that the Anti-gun group – Moms Demand Action, is pressuring Kroger to ban legal firearm carry (including concealed carry) in your stores.  Also in the news is the horrendous beating of a Kroger shopper and Kroger employee at one of your Memphis locations.  It is these heinous acts of violence which demonstrate the absolute fundamental need for citizens to legally carry firearms to protect themselves and others.  If Kroger gives way to the Anti-gun groups, you are limiting our freedom to protect ourselves.

I applaud Kroger for their initial public statement supporting their position that citizens may still carry firearms in their stores.  However, the anti-gun groups are increasing the pressure.  Please support our rights and prevent these groups from changing your policies.  If Kroger does unfortunately ban legal firearm carry in their stores, I am upset to say that I will bring my business to another grocery store chain.

Farm like your life depends on it!
Evade Unlawful Arrest or Kidnapping