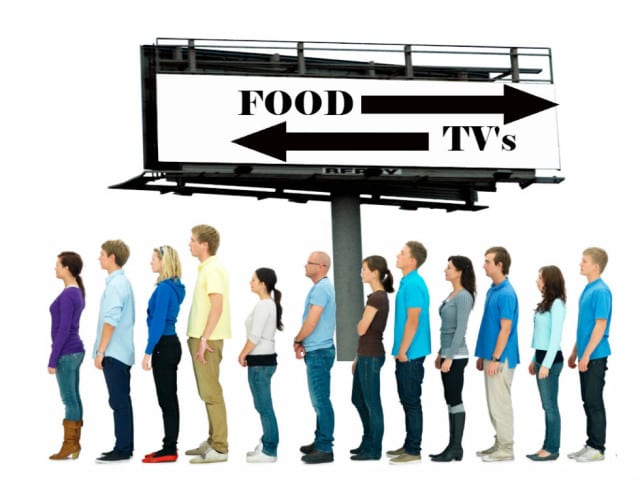 Either we have some incredibly narrow reporting on the part of UK’s Mail Online, or we are witnessing a spectacular event of how incredibly dense the population of sheep are.

MOSCOW (AP) — Russian consumers flocked to the stores Wednesday, frantically buying a range of big-ticket items to pre-empt the price rises kicked off by the staggering fall in the value of the ruble in recent days.

Russia’s currency has been collapsing 15-20% in the last day, and consumer panic is not helping it out at all.  Russians are trading in their rubles for dollars or spending their rubles on consumer goods.  This may set off a train of events that further devaluates the currency, and could even lead to a bank run.  Russia made a dramatic moved and increased their ruble interest rate 6.5% to 17% which is one of the highest interest rates in the world.  This has plugged the sinking ship, but no one knows if it will hold.

You would think that these extraordinary circumstances would cause Russians to run out and start preparing.

Actually…not so much.  As the UK article shows, Russians are running to stores like IKEA and buying furniture, TVs, and other ridiculously useless items. 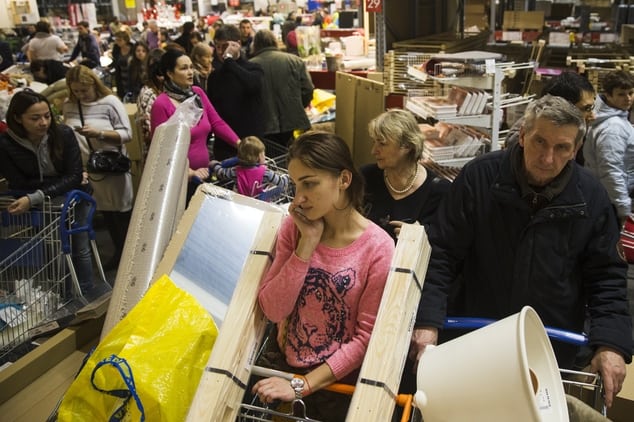 What Will Happen in the United States?

The global economic situation is grim, and one might expect these same events to happen within the United States at some point in time.  When and if it does, will people rush out to buy life necessities?  If this situation in Russia is in any way indicative of the overall world population of sheep, odds are “probably not.”  While some will make their best effort to obtain food and other necessities, it is not a stretch of the imagination to see a situation like Ferguson on steroids.  Not only will there be looting, but many will waste their dollars on senseless purchases like TVs, electronics, and other goods that will have no bearing on their overall survival.

Let me end this article by sharing a heartfelt moment with my readers.  This event of Russian currency collapse is all part of the currency war that is taking place between the US, its allies and Russia.  Over the last couple years (and this year particular), we are witnessing a cascade of events that will lead us to world war.  When talking with owners of other preparedness websites, we see this trend coming to life sometime in 2015.

Merry X-Mas! Give the Gift of Vaccination!
“The Interview” Pulled – Something Fishy is Going on