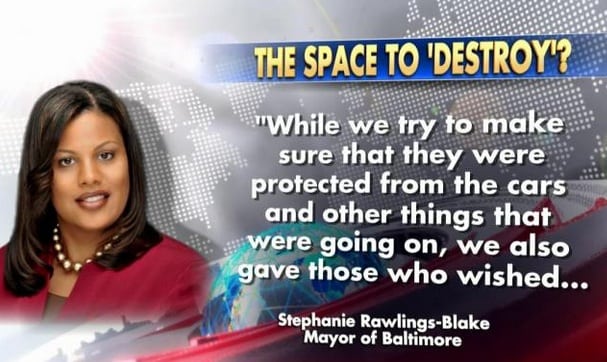 Baltimore Murder Indictments – The Beginnings of a False Flag

One of the biggest news stories out of the Baltimore Riots was from their own Mayor, Stephanie Rawlings-Blake who is quoted as saying:

“While we tried to make sure that they were protected from the cars and the other things that were going on, we also gave those who wished to destroy space to do that as well”

The other big announcement was the Homicide Indictment on six (6) police officers which was heralded by protestors as a major achievement.  However, I believe both of these components are false flag precursors in order to stoke a much larger incident.

Space to Destroy & Ties to the Feds

Why would a mayor let the people destroy public property?  You could argue that she did not want to stir the pot further and have additional black/white injuries or death.  In this case, perhaps property damage is justifiable whereas more loss of human life is not.

However, what if she did so to encourage damage and destruction?  That sounds completely ridiculous, but not if you consider the overall narrative.

We can solve this first question by first concluding that she is not an innocent, isolated mayor who simply makes bad decisions.  She is in fact tied directly to Obama’s Lions den as one of several mayors to provide broad input and testimony for a special 21st Century Policing Task Force.

You can read her “public” recorded testimony here where she says:

“The federal government can be a strong partner in our efforts in build better relationships between the police and community.”

To be clear, she is not one of the members sitting on the task force.  However, given her involvement in the first meetings and testimonies of the task force, and her unwavering support of having more federal intervention in local police departments, we can certainly suspect malicious intent.  She also has her hands in the Feds pockets as she continually seeks Federal Aid Money. 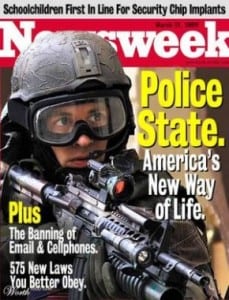 What’s the mal-intent?  The trend of America as a Police State nation is mainstream and has been for some time now.  We are aware that the Pentagon is funneling military weaponry to all local police departments for free via the 1033 program.

We are also aware of psyop conditioning of the American public as we saw massive displays of martial law force during the Boston Bombings, Ferguson, Eric Garner protests, etc.  Aside from these more “major” events, there is almost a daily flood of feed news from local news agencies showing cops in full military camouflage, flak jackets, and armored personnel carriers.

The last part of the puzzle is to make Americans WANT IT.   It’s an age old concept that even Benjamin Franklin spoke about – “Those who would give up essential Liberty, to purchase a little temporary Safety, deserve neither Liberty nor Safety.”  In order for people to give up their liberties, we need to ensure they fear for their safety.  Personally, I believe the Mayor allowed the destruction in order for all of America to witness on television.  Just one more event for the nation to see so that they can support the increasing police state.

The second false flag component is the Homicide/Murder Indictment.  This is an incredibly serious charge which requires undeniable evidence that there was a planned intent to kill.  Even with the damning evidence in the OJ Simpson trial, we saw him walk free.  It gives testimony that you need to have a rock solid case.  Other prominent attornies are saying the same thing…

“I understand why the mayor and state attorney want to prevent riots . . . but that’s not the job of the justice system . . . You cannot allow police officers or any other defendants to become scapegoats for crowds demanding a continuation of rioting,” he told host Steve Malzberg.
“There’s no plausible, hypothetical, conceivable case for murder under the facts that we now know them. You might say that conceivably there’s a case for manslaughter. Nobody wanted this guy to die, nobody set out to kill him, and nobody intentionally murdered him.
“The worst-case scenario is a case for involuntary manslaughter or some kind of reckless disregard, but the idea of without further investigation coming down with murder indictments . . . This is a show trial. This is designed to please the crowd. It’s designed to lower the temperature.”

Lower the temperature eh?  Well, it did for a very short time.  However, imagine what will happen when Baltimore does not get their murder CONVICTION.  Regardless of the fact that the police brutality may have contributed to the death of Freddie Gray, there WILL NOT be sufficient evidence to convict the officers.

Do you think protestors will be satisfied with a jury verdict?  During the Michael Brown Ferguson case, “Hands Up, Don’t Shoot” became the slogan.  Even after it was proven via coroner reports that Brown did not have his hands up, the slogan is still used to this day.  Let’s say that after this Baltimore court hearing, we find undeniable evidence that the officers were 100% innocent.  There WILL NOT BE RATIONALE MINDS IN THE STREETS.  There will only be a thirst for police blood in the streets!  Even if a lesser charge like manslaughter is issued on the defendants, I do not believe people will be peaceful.

Prepare for violence when this happens.

So, back to the false flag motive…Could it be that the Baltimore mayor first let protestors destroy Baltimore so that the nation would request more police state and federal presence?  To add to the narrative, is it possible that the prosecuting attorney assigned the homicide indictment not to cool down the protests, but to fuel the fire for a later date?

Regardless if there is false flag malicious intent, the outcome will not be good.  This summer will be on fire!