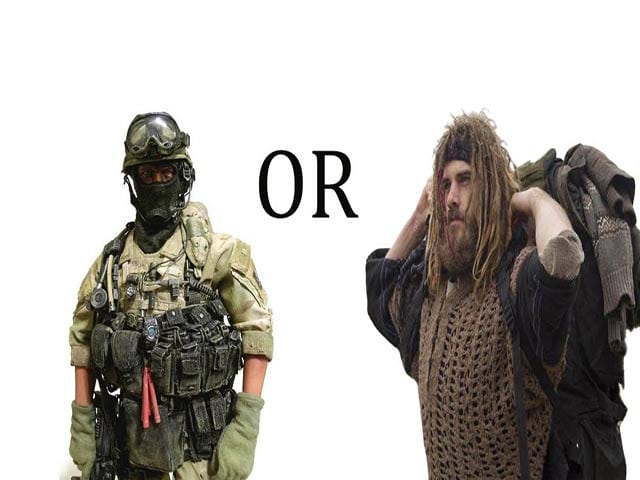 The Grey Man principle is a prepper term for being bland and not standing out in your surroundings.  Most notably, followers of the principle say that wearing tactical clothing and backpacks will be a dead give away to others in a SHTF scenario that “this guy has stuff we need”.  This will inevitably lead to you being tracked and looted or even killed.

Rather than display all your preps, it’s recommended that you conceal what you have.  Instead of a tactical backpack, wear a regular school type backpack.  Instead of camouflage or other tactical gear, wear jeans or other ordinary clothing.

Being a practical prepper, I think there is a balance between the two.  If you have the money and find a good use for it, buy the tactical or mil-spec gear.  So long as you shop and research it correctly, it WILL be beneficial to you.  However, there are indeed certain times in which you should or should not deploy it.  Here’s a couple examples:

In any scenario, situational awareness of how surrounding individuals react to your presence is key.

Below is an analogous video to the prepper gray man principle.  I ask that you put aside any ethnic & gender issues and focus on the principle of the grey man when watching this video (this video’s purpose is geared more towards gender and Muslim issues).

When the woman is walking around with long hair and T-shirt, it  garnishes men’s attention (rightly or wrongly).  Imagine yourself as a prepper with tactical gear visible.   Think you would get the same attention? (To be clear, I do not support women wearing the hijab, so don’t even go there).

When she is completely concealed in a Muslim hijab, no one cares to even look at her.  Imagine that this is synonymous with concealing your gear in a dark inconspicuous bag.  Do you think you could slip by the mass of people?  Perhaps….at least you would stand a better chance at not garnishing unnecessary extra attention.