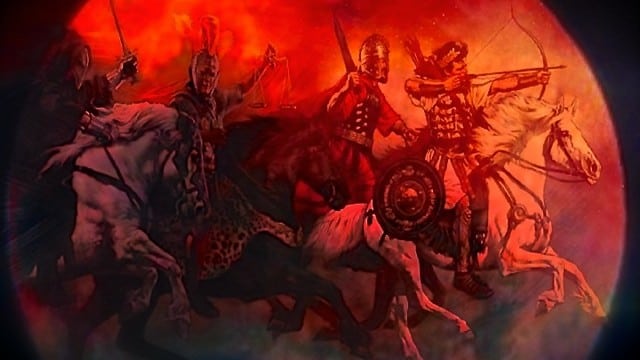 September 2015 – Everything Points to This Month

As I’ve mentioned to my readers, I feel like something critical is going to start this September.  I do not think it will be “the end”, but it will be the start of a paradigm shift for what we define as “normal”.  My friends @ Investment Watch Blog have put together this nice summation of why September is unique.  This is not another run of the mill doomsday conspiracy like Y2k or the Mayan Calendar.  What we have is a unique molding of decaying sectors merging into a perfect storm!

Think about it… This isn’t one isolated event, but a culmination of independent decaying sectors:

This does not happen by accident.  Here is what Investment Watch Blog has to say about it.

Just thought I’d collect all the information pertaining to the end of September as something that will change the earth.

1- The Day of Atonement happens to be on the 23rd of September.

2- The Pope’s visit to the USA which happens on the 23rd.

3- Jade Helm’s conclusion which falls on the 15th.

4- There’s something in the Jewish religion which is called Shmitah. Rabbi Johnathan Cahn noted that the Shmitah in 2001 caused the stock market collapse at the end of September, and then in 2008 the Shmitah also caused the economy trouble. The next Shmitah happens to be at the end of the 29th day of Elul this September.

5- According to Thomas Horn in his book Petrus Romanus written in 2012 he notes the following about Daniel’s prophecy and specifically this verse “Know also and understand, that from the going forth of the commandment to cause to return and to build Jerusalem, unto the Anointed the Prince, shall be seven weeks.”

Jerusalem was reclaimed by Israel during the Six Days War in June of 1967. Recall that in the seventy-weeks paradigm, the “seven” is seven weeks of years which is (7 x 7) forty-nine years. T. W. Tramm explains a remarkable concurrence:

6- The Bible has a verse called the Parable of the Fig Tree, and it says that when you see the budding of the fig tree, you will know that the kingdom of God is near and that this generation will not pass until all things are fulfilled.
Now the average generation lasts 67 years, and some people have linked the budding of the fig tree to the birth of the Nation of Israel in 1948. So if we add 1948 and 67 we arrive at the year 2015.

7- There’s a guy in Puerto Rico called Efrain Rodriguez I think who’s saying that a huge meteor will fall near Puerto Rico this September in the Ocean and will cause huge tidal waves that will affect the east coast of the US.
Interestingly some other people are also reporting about an asteroid or comet on collision course with Earth this September.

8- The date September 23rd appears in tons and I mean tons of movies and TV shows (Editors Note: You NEED to watch this Video.  It shows 17 minutes full of 9/23 and 9/24 date hidden all throughout movies, music videos and other entertainment.  Very Creepy), and history has shown us that movies contain a lot of dates and predictions and symbolism about future events look it up on Youtube and you’ll see a lot of videos pointing it out.

9- The French Foreign Minister said in 2013 that we have 500 days to avoid climate chaos. Coincidentally, from when he made that speech, the 500 days end on September 24.

10- A very revered Jewish Rabbi has been recently announcing that the return of the Messiah (which we know as the Antichrist) is imminent, and he’s calling all the Jews to migrate to the land of Israel.
Here’s an excerpt from the article “When asked about the timing of the Messiah’s arrival, Rabbi Kanievsky answered, “At the end of the Sabbatical year.” Several people have asked the Rabbi to verify this and he has given the same answer each time. This year is the Sabbatical year and it will be ending on the 29th day of Elul, which, by the Gregorian calendar falls on Saturday, September 12, 2015.”
Link:

11- A lot of Muslim clerics are predicting the return of their Mahdi in September this year. Also interesting to note is a prophecy of old written by the Islamic prophet Ali Bin Iben Abi Talib which says that just before the coming of the Mahdi, a tall black man will rise up to take command of the West and he will command the most powerful army on earth. Knock knock Obama?

These are the major points hinting that in September of this year something HUGE will occur that will change life on earth as we know it.

Now I have to admit, that previous doom predictions were all insane and there was no chance of them happening. But this September is different, all the signals are pointing toward it, I can feel it, a lot of people can feel it too, and I have listed too many points about this September. This is too big to be just a mere coincidence.